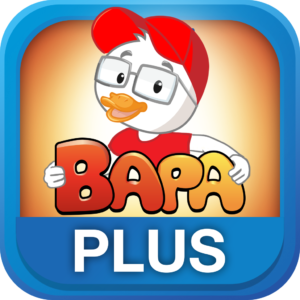 The Bilingual Articulation and Phonology Assessment (BAPA) is an individually administered clinical tool developed to assess the articulatory and phonological abilities of monolingual and bilingual speakers of English and Spanish. Spanish speakers represent the largest and fastest growing minority group in the US (US Census Bureau, 2011).
Spanish speaking children now represent 75% of all English language learners in US schools (Shatz & Wilkinson, 2010; Swanson, 2009). Through assessing both languages of a student, the professional can more easily rule out or explain second-language influences and describe errors observed in both languages as well as errors specific to each language. This may help reduce the number of students inappropriately identified as disordered (Perez, et al, 2008) Best practices for assessment of speech sound disorders for bilingual children recommend an assessment of all languages spoken by the child. Certified speech-language pathologists created BAPA specifically to be used as part of a full speech evaluation. Although BAPA is uniquely designed to allow testing in both Spanish and English, the languages are individually normed which makes it appropriate to use with monolingual individuals as well! 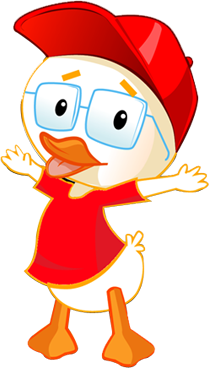 Smarty Ears presents the end to all other articulation or phonology assessment.

Stunning data is automatically analyzed for you:

Including a comprehensive report:

BAPA allows the professional to determine which languages to assess Spanish, English, or Both. 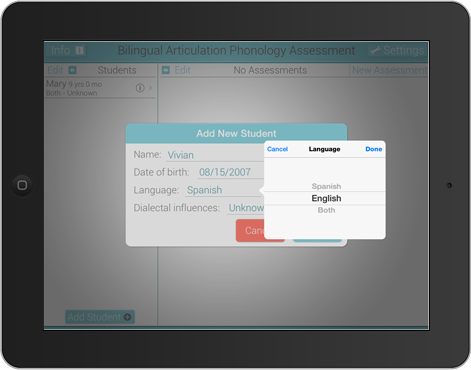 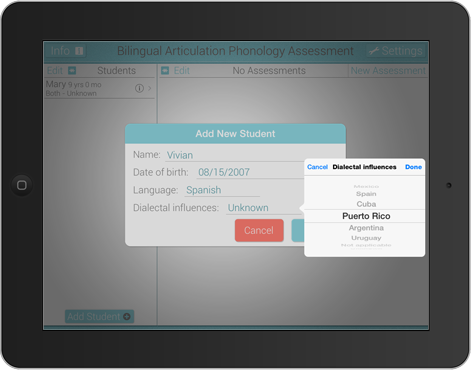 You can select the dialectal influence of each client, which will give you information about how that specific dialect might impact the child’s English productions. 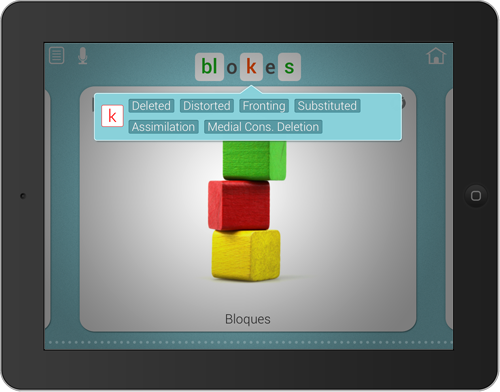 Because some children will substitute vowel sounds for consonant sounds, the BAPA allows the professional to mark either as a substituted sound.
Simply tap on the button to select the phoneme used in place of the target sound. This information will be saved and interpreted by BAPA.
Recording errors on the BAPA is very simple. Each transcribed word is composed of phonemes colored in black and in green (see image below). Targeted phonemes are in green. When the student’s product is not accurate, the professional taps the phoneme to indicate that the production was not accurate. A pop-up menu displays for the professional to choose which type of error the client made. Simply select the appropriate option. The type of errors available to select will depend on the specific phoneme. For instance, gliding will not appear on a phoneme that is not a liquid, and fronting will not appear on a phoneme that is not a velar. The type of errors also depends on the placement of the phoneme in the word (initial, medial, final). If a phoneme is marked in error, simply tap it again to remove the error. If “Substituted” is selected, a list of phonemes will display. Simply select the sound the client uttered instead of the target sound. 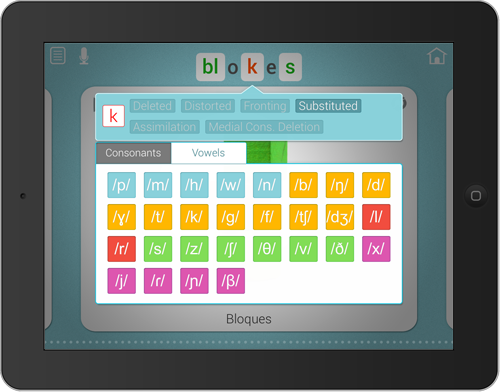 Are you unsure about language proficiency? 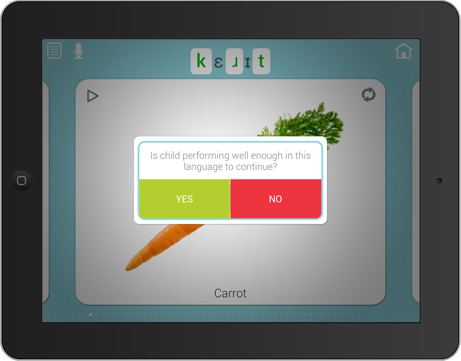 When testing both languages, BAPA will stop after the first eight (8) words and ask if the child is performing well enough to continue in the first language. To continue, simply tap “Yes.” If the child is not performing well (e.g., does not know enough words), simply tap “No” and the app will move to the second language. Note: The first language tested is selected at the beginning of each new assessment and occurs when the student profile lists the student’s language as “both.”

When a child does not produce the /f/ in teléfono, is it because she cannot produce medial /f/ or because she reduced a syllable from a 4-syllable word? Phoneme analysis in the BAPA is limited to 1- to 3-syllable words to avoid counting a phoneme in error when the difficulty is a result of the production of multisyllabic words rather than the actual phoneme.
Instead, multisyllabic productions are assessed independently in the last five stimuli of the test. The inclusion of 4- and 5-syllable words also provides a way to identify the process of weak syllable deletion.
Multisyllabic words are included for both Spanish and English assessment. 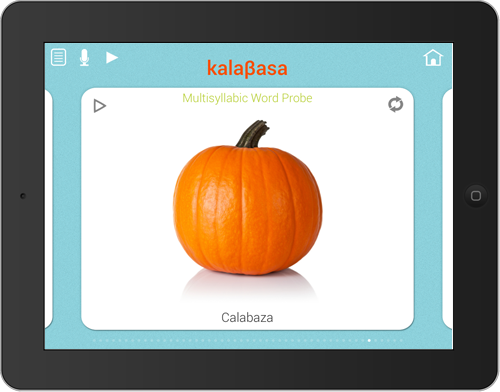 BAPA is a fully standardized assessment! 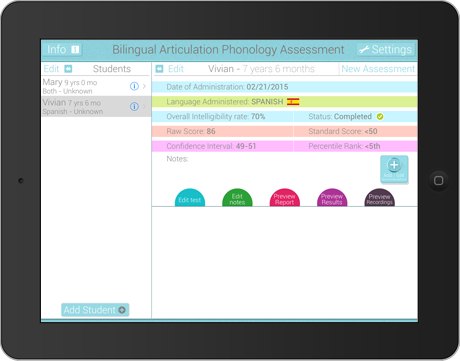 No need to drag out clunky manuals and expensive scoring sheets!
The BAPA is STANDARDIZED and provides standard scores, confidence intervals, and percentile ranks with every completed assessment automatically.
If both languages are assessed, BAPA provides TWO sets of scores!

The BAPA was standardized on 438 children ages 3;0 to 10;11 in the Central Texas area. There are three sets of standardized scores: English only, Bilingual English, and Spanish/Bilinguals in Spanish. The decision to combine the children who were in the Spanish only group and the Bilingual Spanish group was made based on statistics that indicated that there were no significant differences in the groups’ performance on the test. This is consistent with related research findings (Fabiano–‐ Smith & Golstein, 2010; Arnold, Curran, Miccio, & Hammer, 2004; Goldstein & Washington, 2001; Goldstein, Fabiano, & Washington, 2005).

The language groups were determined by a number of factors that included use of language in the home by mother, father, grandparents, and siblings, media exposure in each language, parent ratings of their child’s receptive and expressive proficiency in each language on scale that ranged from 0 to 3 (see below), hours of exposure during the day (see below), and the child’s ability to perform the task in each language. If they were not able to label any of the first seven test items spontaneously, the test was not administered in that language.

A proficiency score was calculated based on the information provided by the parent. If a child received at least four points in a given language, and they were able to spontaneously label at least one of the first seven test items, the test was administered in that language.
239 children were included in the Spanish/Bilinguals in Spanish group, ages 3;0-10;11.
194 children were included in the Bilinguals in English group, ages 3;0-10;11
199 children were included in the English Only group, ages 3;0–‐10;11.
All of the children resided in Central Texas. Mexican Spanish was the dialect reported for 95% of those who speak Spanish. 90% of the children in the Bilingual and Spanish groups were in dual language education programs, in which they were learning to read and write in both languages.
For the analyses of Sensitivity and Specificity, the children who participated in the standardization sample, and an additional 86 students were included. 63 were in the English group and 23 were in the Bilingual English and Spanish/Bilingual group.
Sensitivity and specificity were calculated with three cut-points for each group that correspond with the common clinical cut-points of 1 standard deviation below the mean (Standard Score=85), 1.5 standard deviations below the mean (Standard Score=77)., and 2 standard deviations below the mean (Standard Score 70). The results are as follows. 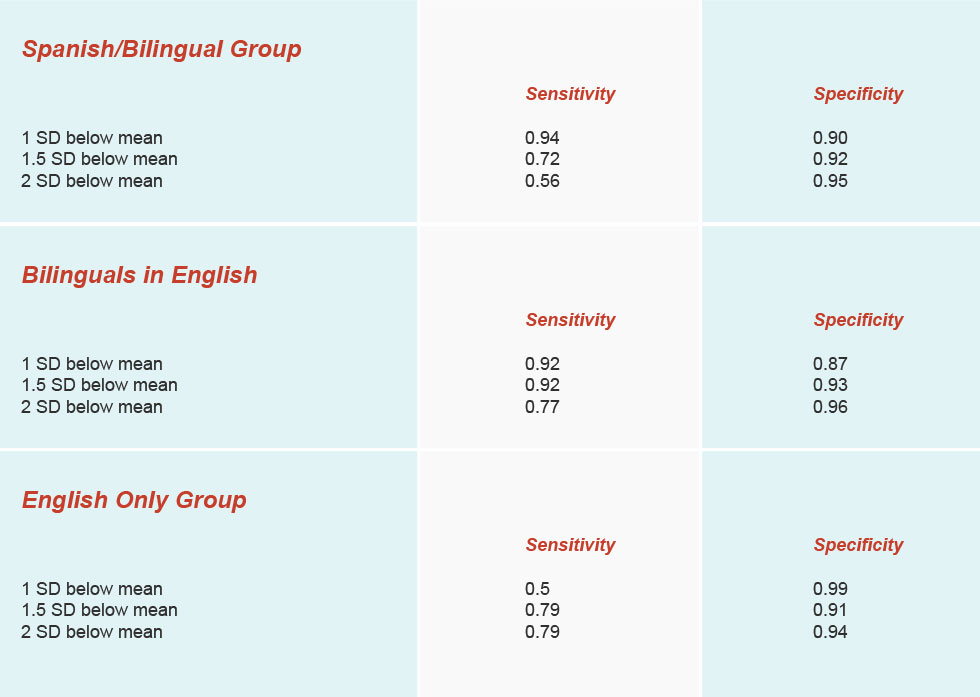 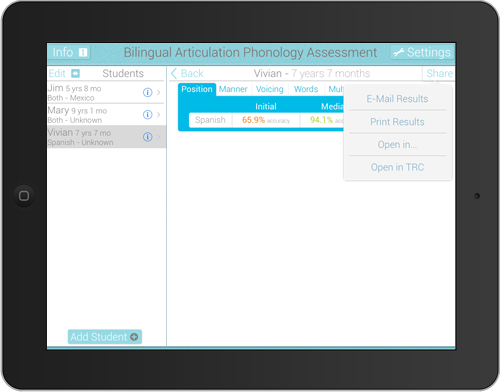 The professional can e-mail the results of the screening immediately after administration. To email the results information, tap on the “share” button found in the upper right hand corner on the Results screen.
A pop-up screen will display with options for sharing results by e-mail, exporting the results to the Therapy Report Center, or opening in another app of your choice (e.g., dropbox, PDF viewer).
Users can e-mail the results to themselves in order to save for their records and keep a backup of the student’s assessment, or to send to the parents. The e-mail is set up as a simple report and can be sent as HTML or a PDF.

“I think the Bilingual Articulation Phonology Assessment app is a great value when you compare it to the price of most articulation assessments available on the market. It is well designed and gives you a very detailed picture of a child’s articulation and phonology skills. I feel it would be an excellent tool for SLPs looking for a cost-effective alternative to the traditional paper-based articulation tests! It’s a much needed tool, since there isn’t many bilingual or Spanish articulation assessments out there. I love having an assessment on an iPad, making it super portable. This is really good for me since I travel to test my bilingual kids. “The ability to generate a full report is definitely one of the coolest features of this app, because its not just incredibly time saving but also very detailed.”